Should fish farming be banned or severely restricted? Or should it be encouraged? 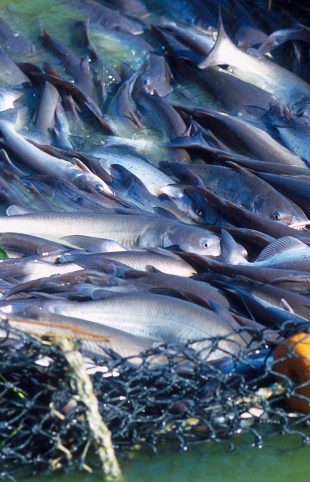 Large-scale fish farming became widespread in the 1960s. Now, more than 30% of all sea animals consumed worldwide come from fish farms (measured by weight). Widely farmed species include carp, salmon, trout, tilapia, mussels and prawns. Government-backed research efforts are aimed at extending this list and commercially-farmed cod and tuna are now beginning to be produced. Fish farms can be based on land or at sea. On land, fish are raised in ponds or tanks. Sea-based farms tend to be near the shoreline, and fish are kept in large mesh cages. In 2002, 91% of farmed fish were produced in developing countries, especially in Asia. China is the world’s largest producer, but fish farming is also a significant industry in Peru, India, Indonesia and Chile. In the developed world, fish farming is particularly prominent in Norway, Canada and Scotland. Some environmental groups, such as Greenpeace, oppose fish farming and want it to be banned or severely restricted. However, supporters of fish farming argue that it is a cheap and sustainable way to provide healthy food to large numbers of people. At the time of writing (June 2006), governments have done little to restrict fish farming.

Exploitation: Is it OK to exploit fish and subject them to physical pain?

Recent research in the UK, the USA and Canada has shown that fish are able to feel pain. In many countries, including the USA, there are no regulations to minimise pain to fish. Large numbers of fish are packed into small cages, in which lice and infections spread easily between fish. Cases of lice eating down to the bones of farmed fish are common. Fish are not stunned before they are killed, and are sometimes killed by suffocation or being frozen. At very least, fish should receive the protection against cruelty that farm animals (e.g. pigs, cows) receive. It would be better if fish farming was stopped completely.

Fish feel pain and should not be made to suffer

Humans have a right to exploit fish however they want

It is more important that people are well fed than that animals are comfortable. This principle is accepted with land animals: chickens are often raised in cramped conditions. Moreover, nothing is done to stop pain to wild fish when they are caught. People should be encouraged to eat fish. Fish are a nutritious source of protein and are high in essential omega-3 fatty acids. The most efficient way to produce large quantities of fish is to farm them. This avoids the unpredictability, danger and cost involved in trying to catch wild fish in rivers and oceans. Fish farming makes cheap fish available for people to eat: it should therefore be encouraged, not banned.

Fish do not feel pain

Diseases and parasites spread from fish farmed in cages in the sea to wild fish. According to Greenpeace, a typical salmon farm of 200,000 fish produces roughly the same amount of faecal matter as a town of 62,000 people. Faecal matter reduces the oxygen level in water. This leads to toxic algal blooms, which kill marine life. In the northern Pacific, over 1 million farmed Atlantic salmon have escaped from fish farms. These have competed with wild Pacific salmon for food and the number of Pacific salmon has fallen. There has also been interbreeding between escaped and wild fish, weakening the wild stock. To avoid these problems, fish farming should either be banned or be subject to much stricter environmental controls.

Fish farming does not stop the catching of wild fish

Fish farming on land would address many of the problems raised by the proposition.

Many of the problems raised by the proposition could be addressed by farming fish in tanks on land, rather than in cages at sea.

Fish farms do more to protect wild fish than to harm them.

Overfishing means that natural stocks are currently severely depleted. For example, cod may die out completely in the North Sea unless there are drastic cuts in the number caught. Fish farming greatly reduces the need to catch wild fish. Unless we stop eating fish, fish farming is the only way to preserve wild fish. Furthermore, trawling in the oceans often results in bycatch, where unwanted animals are needlessly caught in nets and killed (e.g. dolphins, and fish which are too small or from protected or uncommercial species). Long line fishing for species like tuna leads to the death of millions of seabirds who are attracted to the floating bait on hooks trailed behind ships. None of this happens with fish farms.

Fish farmers are developing ways to reduce the number of wild fish they need to catch to feed farmed fish.

They are researching fish feeds based on poultry and vegetable oils instead.

Farmed fish is not healthy

Fish are fed chemicals to make them grow faster. The long-term effect of these chemicals upon humans is unknown. To deal with disease, farmed fish are fed even more chemicals and antibiotics. Antibiotic-resistant bacteria are present in many fish farms. These bacteria are consumed by humans when the fish are eaten. Eating the fish could therefore risk human health.

The proposition is scare-mongering. There has been no major outbreak of disease in humans as a result of eating farmed fish. The health benefits of eating fish greatly outweigh these supposed risks.