Is storing nuclear waste in underground repositories a good idea? 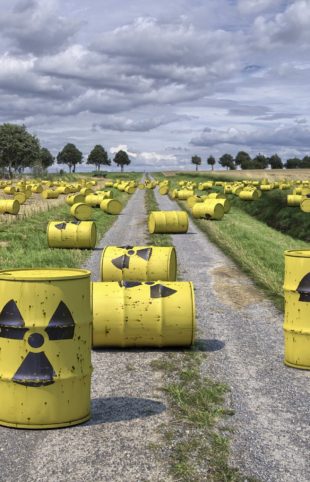 Underground nuclear waste storage is a controversial topic that accompanies the question of whether nuclear energy is, overall, a good idea. The question of where and how to store the radioactive waste that follows nuclear energy production has been at the heart of concerns with the energy source. In the United States, Yucca Mountain, near Las Vegas, was the most prominent underground facility ever proposed, where virtually all of the nation’s spent nuclear fuel rods would have been permanently buried over 300 meters beneath the ground. Citing concerns regarding the possibility of leakage over thousands of years, and local discomfort over the plan, the 20-year multi-billion dollar project was halted by the Obama administration in 2009. But, is this an overarching rebuke of underground nuclear waste disposal? This remains an open question, as the world seeks to deal with the radioactive waste it is currently storing in above-ground facilities, which are generally considered less safe than deep underground storage facilities. The sub-debates involved include whether underground nuclear waste storage presents a threat to the environment, whether it is safe to humans short term and long term, the economics involved, and if case studies on underground nuclear storage provide any guidance. The pros and cons on this topic are considered below.

According to EU Energy Commissioner Guenther Oettinger, the commission believes there is a broad scientific consensus that highly toxic nuclear waste is best disposed of deep underground. The solution was recommended by nearly 200 scientists and engineers in a 2009 report called “Strategic Research Agenda”.[1]

Nearly all countries produce nuclear waste. No matter what, therefore, the world must find a way to deal with it. If underground storage is the best way, then the world has no choice but to adopt the practice. A November 2010 EU Nuclear Commission report: “All EU member states generate radioactive waste, whether or not they have a national nuclear power program, and therefore have to identify solutions and define national requirements to manage it properly.”[2]

Nuclear energy does not emit carbon emissions in its inherent energy extraction process, although some carbon is emitted in the manufacture of plants, etc. This means it is a key weapon in the climate change fight. Dealing with the waste problem with underground storage is, therefore, also key in this fight.

Charles McCombie, Executive Director of Arius: “The worst part is the part that we don’t see – the mining and milling of uranium.”[3]

It is true that nuclear energy is 0-emission in its inherent processes, but it is wrong to sacrifice one environmental principle (local ecosystems and human safety) in order to push another (climate change).

First of all, underground repository is at least below 300m underground. If nuclear waste leaks then we can just seal up the spilled area so that the radiation doesn’t become airborne. According to DEP(Department of environment protection), they monitor the nuclear waste storage site and the environment which ensures us that nuclear waste cannot possibly reach environment or humans.

Claes Thegerstroem of Sweden’s Nuclear Fuel and Waste Management group: “We can never say it is completely safe. If we start to speak like that, sooner or later, people will understand we are not telling the truth. But we can say, of all the options, this is the best option. Everything else is less safe.”[4]

The EU’s Energy Commission report in November of 2010: “Without EU action there is an increasing risk of a negative environmental impact over time. Geological disposal is the only end-point option that is being actively pursued.”[5]

A spokeswoman for Oettinger said in October of 2010: “Whether you are in favour of nuclear energy or against, it is always in your interests that it is stored absolutely safely.”[6]

EU Energy Commissioner Guenther Oettinger stated: “Safety is indivisible. If an accident happens in one country, it can have devastating effects also on others.”[7]

Jeremy Shere. "What Is The Best Way To Dispose Of Nuclear Waste?" Moment of Science. March 23rd, 2010:

“There have been a few other interesting ideas–such as burying nuclear waste beneath the ocean floor. Scientists have also thought about putting waste in really deep holes, burying it in polar ice sheets, and stashing it beneath uninhabited islands. […] But there are problems with each of these ideas. For example, it would be difficult to monitor nuclear waste under the ocean floor. Waste buried deep in the earth, meanwhile, might contaminate ground water. And as ice sheets continue to melt, it’s hard to say how long nuclear waste would remain buried, or where it would end up if it floated away. Plans to store waste produced in the United States in Yucca Mountain, in Utah, have been put on hold. So for now almost all nuclear waste is kept above ground in special containers at a few hundred different sites around the country. So far the containers seem safe, but there’s always the possibility of corrosion. So, basically, there is no best way to store nuclear waste.”

Underground storage will always incite a certain amount of fear and resistance among publics. This will never go away completely.