Are settlements justified? Is expansion defensible? 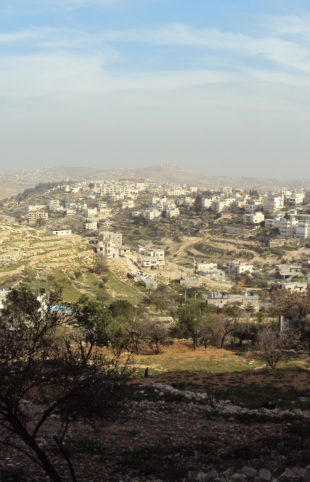 Israeli settlements are communities inhabited by Israelis in territory that was captured during the 1967 Six-Day War. Such settlements currently exist in the West Bank, which is partially under Israeli military administration and partially under the control of the Palestinian National Authority, and in the Golan Heights, which are under Israeli civilian administration. International bodies, including the United Nations Security Council, the International Court of Justice, the European Union, Amnesty International and Human Rights Watch and some legal scholars have characterized the settlements as a violation of international law. Israel, the Anti-Defamation League, and other legal scholars disagree with this assessment. Many US administrations have called on Israel to halt its settlements, and have even called them illegal. In 2009, the Obama administration also called on Israel to halt its settlement construction. Yet, Israeli Prime Minister Benjamin Netanyahu has rejected these calls and continued to facilitate settlement expansions. The debate continues with the main arguments below.

Israeli settlements do not impede creation of Palestine

“Is current and recent settlement construction creating insurmountable barriers to peace? A simple test shows that it is not. Ten years ago, in the Camp David talks, Prime Minister Ehud Barak offered Yasser Arafat approximately 94 percent of the West Bank, with a land swap to make up half of the 6 percent Israel would keep. According to news reports, just three months ago, Prime Minister Ehud Olmert offered 93 percent, with a one-to-one land swap. In the end, under the January 2009 offer, Palestinians would have received an area equal to 98 to 98.5 percent of the West Bank (depending on which press report you read), while 10 years ago they were offered 97 percent. Ten years of settlement activity would have resulted in a larger area for the Palestinian state.”

Former US president Bill Clinton: “The Israeli people also must understand that . . . the settlement enterprise and building bypass roads in the heart of what they already know will one day be part of a Palestinian state is inconsistent with the Oslo commitment that both sides negotiate a compromise.”[2]

Condoleezza Rice said in a November 7th, 2008 visit to the West Bank: “Settlement activity, both actions and announcements, is damaging for the atmosphere of negotiations. And the party’s actions should be encouraging confidence, not undermining it. And no party should take steps that could prejudice the outcome of negotiations.”[3]

UN Secretary-General Ban Ki-moon’s spokeswoman Michel Montas: “The secretary-general calls on the government of Israel to halt settlement expansion and reiterates that the fulfillment of Road Map obligations by both parties is an important measure underpinning the political process between them.”[4]

Jewish settlements are not part of any "illegal occupation"

Michael Freund. "Israel Has Every Right to Expand Settlements". The Chicago Sun-Times. May 15, 2002:

“Israel did not ‘occupy’ these territories, as the Palestinians and others would have you believe. In the 1967 Six-Day War, Arab armies massed on Israel’s narrow borders, vowing to destroy the Jewish state. In a war of self-defense, Israel succeeded in overcoming its enemies, in the process taking control over Judea, Samaria and Gaza. Under international law, territories are considered ‘occupied’ only when they are taken in an act of aggression – something which clearly does not apply to Israel’s case.”

Israeli settlements may be unfortunate, but are not illegal.

It is one thing to argue that settlements are unfortunate, and even that they make a peace settlement more difficult, but it is entirely another to argue that they are illegal. Many seem to confuse these ideas. They are entirely different and must not be confused. Any international legal case against Israel must solely focus on the relationship of Israel’s actions to the strict letter of the law, such as the Geneva conventions.

Israeli-only roads were built to protect against attack

“It is also important to note that the so-called ‘apartheid roads’ did not exist prior to Arafat’s 1994 ascent to power, nor are they apartheid. During the decades from 1967 on, Israelis and Arabs used the same roads, many of which ran as main streets through the towns and villages of the West Bank, bringing in millions of tourist dollars to hitherto impoverished small-town Arab merchants. Only after Arafat began his terror war, and Israelis driving through Arab towns found themselves in mortal danger, did Israel build the ‘Israelis only’ (not ‘Jews only’) roads. Rather than take punitive measures against Arab offenders who murdered or injured Israeli motorists (Jewish, Christian, and Moslem), the government decided instead to create this by-pass system so that Israelis could reach WBGS destinations without exposing themselves to terrorist attacks.”

President Carter, April 1980 interview: “Our position on the settlements is very clear. We do not think they are legal.

Secretary of State Cyrus Vance before House Ctee. on Foreign Affairs, March 21, 1980: “U.S. Policy toward the establishment of Israeli settlements in the occupied territories is unequivocal and has long been a matter of public record. We consider it to be contrary to international law and an impediment to the successful conclusion of the Middle East peace process…Article 49, paragraph 6, of the Fourth Geneva Convention is, in my judgment, and has been in judgment of each of the legal advisors of the State Department for many, many years, to be. . .that [settlements] are illegal and that [the Convention] applies to the territories.”[5]

Israeli settlements are a form of annexation

“The Israeli administration has applied most aspects of Israeli law to the settlers and the settlements, thus effectively annexing them to the State of Israel.”

“Particularly evident is Israel’s manipulative use of legal tools in order to give the settlement enterprise an impression of legality. When Jordanian legislation served Israel’s goals, Israel adhered to this legislation, arguing that international law obliges it to respect the legislation in effect prior to the occupation; in practice, this legislation was used in a cynical and biased manner. On the other hand, when this legislation interfered with Israel’s plans, it was changed in a cavalier manner through military legislation and Israel established new rules to serve its interests.”

Israeli-only roads to settlements are unlawful.

Israel has built Israeli-only roads to its settlements. This institutionalization of discriminatory policies is unlawful, or at least wrong in a modern democratic society.